The kitchen door swung open and the prism made it home through.  As his wrinkled eyes welcomed the dawn, old cigars from the drawer case were lined up on the table top as if a celebration called for it, as if yesterday has left behind its shape.  During those days newspapers were treated like they were still part of breakfast, of over-easy-peppered sunny side ups and black coffee while smoked salmon and VCRs kept the night intact.

Retired suitcases filled the closet and the clock was silent and still. The mailbox was hollow, and the words were deep-seeded somewhere far away.

But the stream was endless, and the pictures were always as clear as day. The possibilities never eluded him, as if miracles do happen all the time.  He would always go back holding onto a piece of paper, to a promise across a long stretch of an attempt to dream only to find the morning at the end of it.  A slow erratic pace, but a rediscovery is always almost a certainty.

And when sleep is out of reach, the dents and the dimples on the other side of the bed keep him company. He tells himself, that nights do end and some things last.  After all, the universe allows a little indifference in its lifetime.

For it is not sentimental he would always think? Just sheer contemplations of the complicated human heart.  It beats to resonate across the end corners and the clutters, cruising the seas and highway intersections to the point of absolution or tragedy.  The years that went by were reduced to mere flashes and pixelated photographs. They are no longer numbers but the very accumulation of delightful shared experiences.

How can one be grateful without despair? Suffering concludes pretenses, and it clears the way for contentment. For sure he recognizes what was once there.  The shadows of the past let him remember that he can never make an accord with time. He steals, therefore, a thief between the paradoxes.

But what does it mean really?  Whose answer may trigger either sober inspirations or bitter ending catastrophes. Pardon the blunt demeanor, but the ink is blotted, and the pen is starting to skip.

I wish to taste all the good from a honeycomb. To weather the skies. 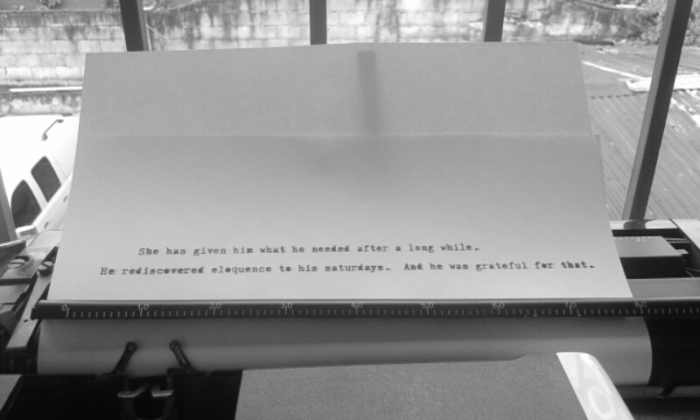