They ended up sitting around at the corner table under the collage of 11×14 black and white photographs taken in random, but the pictures were more ornamental than art.  The corrosive sea salt carried from the ocean nearby, turned the wooden panels on the walls bleak yet somehow complimented the rustic ambiance the place was going for.  And from time to time, a cool heavy wind wafted outside, chasing away the sultry remainders of the afternoon sun.  There was an idle sort of atmosphere in the motorways, making its way through the open windows of the establishment.  On the background was the occasional thin clanking sound of coins dropping from the insides of a pay telephone and there were thick drizzles throbbing against the rubber canopy roof spread out over the restaurant door, suggesting that the hard rain will arrive anytime soon.

The place was in a residential area, standing between the surrounding towering trees that grow around the vicinity. Invariably there were just quite a few customers who went there.  The tall windows were locked shut but usually left open when the rain is out, to entice people to swing by for a meal or a nightcap.  The wooden ceiling fan slowly spun above the patrons, suspended in the center of the room. The four friends ordered wanton soup as always.

As they waited, they can’t help but pay an occasional glance at the direction of the runny window pane.

The pluvial night sky was a usual sight, especially during this season. No reported storm was coming in though.  None of them spoke after the ceremonial chatter and catching up, the four of them fell silent, lost in their own thoughts but it was not the kind that was thick and indifferent. It was a natural thing for longtime friends, especially since they have discoursed about everything going on with their lives to the point that there was nothing to talk about anymore at the moment.  It was not a pact or something they have imposed as a rule between them. It’s just that they can’t seem to keep any secrets from each other.

There were even fewer guests that night.  There was an overweight guy mulling over a saucy steak with a beer mug at the bar area and a couple tourists with their nine-year-old daughter quietly having dinner.   The guy at the bar was used to be a professional swimmer. He was supposed to compete in a regional tournament, but during an uneventful twist of fate some years ago, on the eve of the qualifiers after practice, he was caught in a car accident causing a severe and permanent injury on his right shoulder.  This has prevented him to compete ever since.  He works as a lifeguard at the nearby beach and occasionally coaches aspiring children.

The couple was relatively young, still in their twenties. They met during a party on an island in the south.   Life was tough, and so good money was hard to earn.  Consequentially the husband worked longer hours and even did double shifts if it need be, that it has gotten to a point that the two hardly spoke to each other.  This trip was supposed to be their chance to fix whatever was left broken.

I rolled up my sleeves and peered through a nearly empty beer glass tilting it a bit sideways.  The beads were all over its cold sweaty surface as I gently wiped them off using my fingertips.  And through the glass, I see the reflection of my friends blended in the low stream of light dawning softly onto its body causing the images to distort.  The only thing that remained unchanged was the hot soup filled with sodium, which we were about to devour. 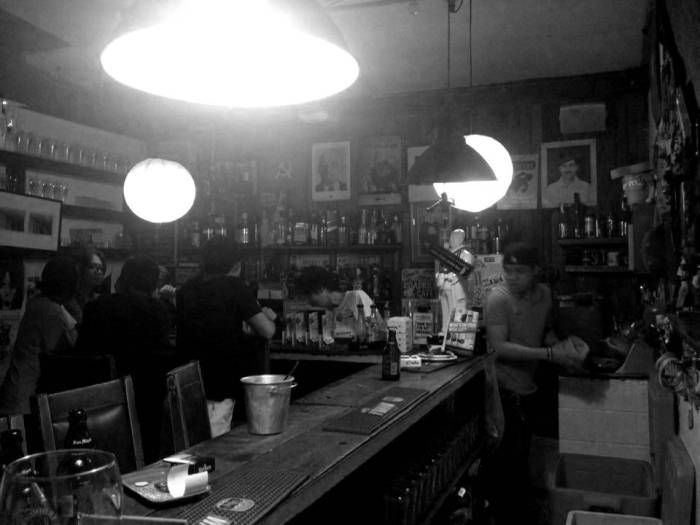 2 thoughts on “The Wanton Club”