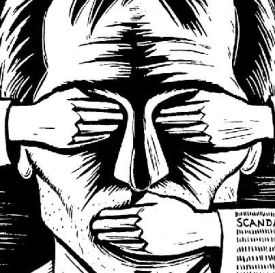 Strike a pose, go ahead and wear your pearly whites clean as I would try to open my mouth and sing.  But why is it that I do not see you singing along? Have you gone tired of me? Instead of hums what creeps in is the frown under the golden crown you call your real man’s hat.

We were sitting on the sidelines once, watching what seemed to be an old marching band approaching towards us as they were playing the tunes of those whom you may call once free.  The funny thing was, their old red parade uniforms did not fit them anymore. Tailored no pockets for possessions and it was not washed either. Yet they brave the stares cast upon them as they make their way towards this dead-end street.  They were the poets of their time.

I turned to you like a child and asked what it was they were singing about. But you said it was nothing of great importance, that I should not pay any attention to.  I guess it pained your feeble heart that you had to throw them the first rock you saw.  I tried to stop you, but you became something else, a giant eggplant. Your head almost exploded.

I go back to the days when we used to write our stories together. Had we told about the meowing dogs, the barking cats and the other animals that learned to talk and rose to save their forest?  About the struggles they had fought for? For the never-ending sunrise that came anyways in the morning. The uncharted deepest sea, to Atlantis, that no man had ever gone to before and the immeasurable ether we used to call faith. I relish the episodes when you used to love your drunken train of thought. I respected you for that.  And when carefree was not yet careless, you always had me each time you slurred. Those reckless words were beautiful in their own light and it was really messy, and it was true, it was our saving grace, we were indestructible we always thought.

“My ghastly September” the red moon has yearned. The barrel of the rifle was left unclean, the blade was stuck stiff to its sheath and sometime during one’s surrender when I had fallen to rest my shield, you snuck out of your shell and had taken off on that magic yellow balloon.  And from up there as you looked down on everyone making your smooth escape, you yelled and called my name to say goodbye.  As I woke and see you through the midnight window pane, I rubbed my eyes in disbelief as you took away my words thinking to yourself that I could never remember to rewrite them on paper. As you leafed through it all, crossing out the lines and then crumpled all the pages, turning them into fuel for your floating vessel for fools.

We are endless you see.

4 thoughts on “The Fool on the Yellow Balloon”