Together with his parents, they were guests at the New Year’s Eve party hosted by his uncle Ramon and his wife Aunt Cecil. Like the rest, he said buenas to the older relatives and placed the back of their hands on his forehead. And after being thrown around like a Ping-Pong ball, he was seated — almost listlessly — near the family punch bowl, away from the smoke of cigarettes wandering about the room like aimless spirits with unfinished business. This was the year FVR has solved the power crisis, the end of his boyhood.

The Christmas tree was still up — the same as in the other households — and there were even unclaimed presents underneath it. The air still stirred in that festive atmosphere that triggered an automatic switch inside his chest. He felt the urge of lighting up a roman candle or perhaps a cone-fountain and thought about inviting a girl he knew across the street.

Kids chased each other around with sparkles in their hands, while the fireworks as if splashing in the night sky, rippled fighting for space and attention.

While everyone was preoccupied with merrymaking, he snatched a whole swig of punch and cruised mischievously among family friends and his unsuspecting relatives. He sidled and scuttled until he was able to completely break free to join the others his age.

He saw his cousins Nathaniel and Trixie went up the stairs first. Then it was Carol, the two Maries, Christine, and then finally Dex who snuck the glasses up to the room. Discipline and tact were highly regarded in the family. But tonight, kids were permitted to stay up as late as they would like. The husbands, joined by their wives were drinking Pale Pilsen beers, until their livers gave out, even dogs could bark all night, but they chose to be holed up in their hiding places instead.

After a while, he followed the rest into Dex’s room. And there he found the host of this secret party sitting on the bedroom rug passing around vodka in dining glasses.

He took his place on the bed, sitting next to the two Maries — the youngest of the cousins– who were giggling in excitement. Carol was perched by the windows wearing her first fourteen-holed Dr. Martens sharing pop magazine stories with Trixie and Christine, while Nathaniel busied with the Nintendo tapes in front of the television.

He chattered with Dex whom he felt closest with. Everyone seemed to be having a good time when suddenly they heard Dex’s dad, their uncle Ramon, calling them out on the door. The uncle was particularly strict, the paternal kind, but also believed that profanity has no place in parenting. All the paraphernalia were pushed under the bed, the two Maries, Trixie, and Christine hid under the bed covers, while he took the closet with Carol.

In the dark, while listening to the only sound that reigned which was their almost syncopated breathing, he accidentally dabbled into the cosmos of this unfamiliar paradoxical curiously. Of course, this could only be an infatuation, a mere glitch in his system. Captured during an unguarded moment, he could not make out the shape of this predicament.

He tried hard not to manifest the distraught. It was a complete abomination, he would be excommunicated for sure. And even through college, this haunted him. He saw fragments of Carol in the girls he dated, it goes without saying that this did not satisfy him. But the momentary remedy offered a relief so as to just get by. He felt bad of course. It was not in his nature nor was his intention to use people. But he could not bring himself to resist whenever he saw a piece of her.

But one thing he could never elude was the probability of meeting her again. Sure, he was able to dodge a few family gatherings, but the New Year’s would be a tough one to get rid of.

Under the hibiscus tree, he marveled over at the last setting day of the year. The skies reminded him of the four-season punch that was slowly draining. And yet again he found another piece of her in the wide canvas over him.

This time though, he has not found any traces of guilt in his chest. At the end of each year, the skies will bleed like no other, but it will be able to endure anyhow, this he finally knew. 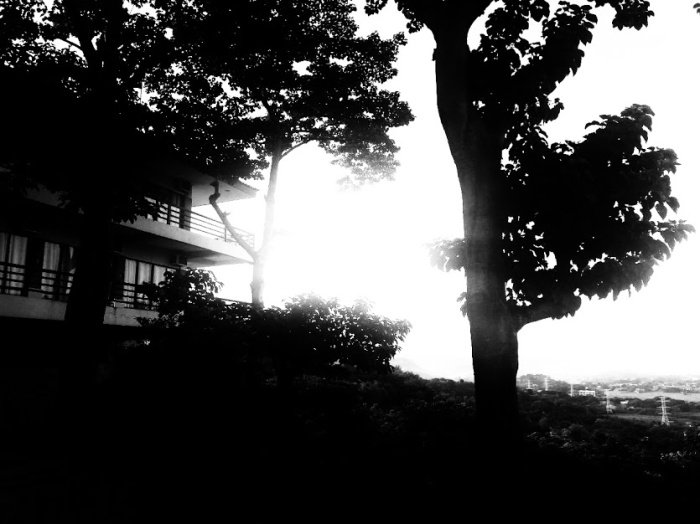